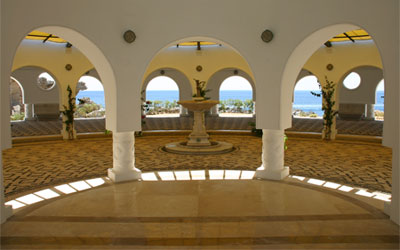 Kallithea Springs are located at the bay of Kallithea, just 9km from the City of Rhodes. Known since antiquity for their therapeutic properties, the thermal springs of Kallithea were utilized by the Italians, in the early 20th century, being very popular and attracting visitors from all over the world.

Nowadays the renovated, majestic premises of Kallithea Springs completely restored and tastefully refurbished are welcoming once again hundreds of visitors per day, being one of the most popular attractions on the island of Rhodes.

Known since antiquity for their therapeutic properties, the thermal Springs of Kallithea were utilized by the Italians, in the early 20th century. The initial premises were inaugurated on July 1st, 1929 and remained in operation until 1967, being very popular and attracting visitors from all over the world. The complex was designed by the architect Petrio Lombardy and the designs were considered among the best architectural compositions of that era.

The thermal springs of Kallithea in Rhodes, were well known since the Ancient Greece times for the beneficial properties of their waters springing up from the surrounding rocks. In August and September crowds of visitors were coming to the area and they were even setting up camps in the surrounding area, so as to be close to the spring.

Since the time of the Dorian Hexepolis 700b.c. and later during the times of the Knights of Saint John at 13th & 14th century the springs were attracting visitors from the surrounding islands, the Asian Coast, the middle east and even from the depths of the Orient being a meeting place of Orthodox Christians, Muslims and Jews.

During the Italian occupation of the island of Rhodes, at the early 20th century the political governor of Mario Lago, took the initiative in 1927, to conduct a systematic study of its waters known to the locals as “Tsillonero” after it’s cleansing properties. The survey was conducted by distinguished hydrologists and doctors under the supervision of the famous Gustavo Gasperini. After Gasperini’s death his son Carlo took over his work, along with the person who was later to become the director of the curative springs, Enea Brunetti.

In December 1928 the initial premises were constructed. The work was assigned to the architect Pietro Lombardi whose designs made it one of the best architectural creations of the period. The premises were inaugurated on 1 July 1929 attracting a large numbers of patients and scientists from all over the world.